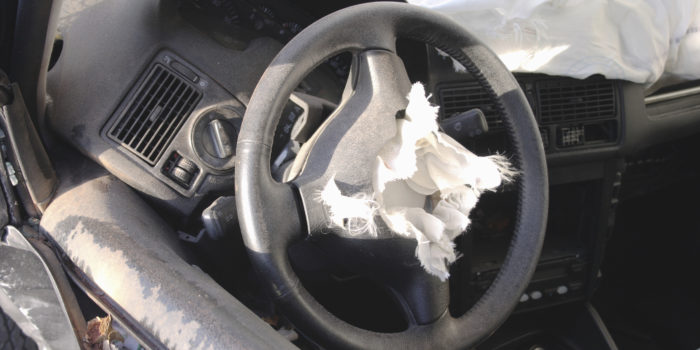 “Vehicles made by 19 different automakers have been recalled to replace frontal airbags on the driver’s side or passenger’s side, or both in what NHTSA has called “the largest and most complex safety recall in U.S. history.” The airbags, made by major parts supplier Takata, were mostly installed in cars from model year 2002 through 2015. Some of those airbags could deploy explosively, injuring or even killing car occupants. (Look for details below on waits for replacement airbags.)

At the heart of the problem is the airbag’s inflator, a metal cartridge loaded with propellant wafers, which in some cases has ignited with explosive force. If the inflator housing ruptures in a crash, metal shards from the airbag can be sprayed throughout the passenger cabin—a potentially disastrous outcome from a supposedly life-saving device.

NHTSA has determined the root cause of the problem: airbags that use ammonium nitrate-based propellent without a chemical drying agent. As postulated early on, environmental moisture, high temperatures, and age as associated with the defect that can improperly inflate the airbags and even send shrapnel into the occupant. To date, there have been 11 deaths and approximately 180 injuries due to this problem in the U.S.

Through various announcements, the recall has tripled in size over the past year. It is expected that the inflator recall will impact 42 million vehicles in the U.S., with the total number of airbags being between 64 and 69 million.”